Not if sales if your goal, but it’s really fun.

I’ve run over 30 Twitter accounts in my time, currently with access to six and not a single one of those businesses or organisations used it to make money. From creating accounts with 0 followers growing to 1,000 in a few weeks to running accounts with nearly 300k followers, the cost of time and effort to grow these accounts will never make you back that amount in business income. Simple.

Same goes for paying an extortionate sum to get a sponsored tweet on a huge account, not all those followers will see it and people aren’t on Twitter to buy, but to converse and join in the conversation.

However, I still fly the Twitter fan club flag high as it still has plenty of business benefits besides creating direct revenue or bagging you hundreds of clients:

Twitter is a great platform for nipping complaints in the bud and getting the opportunity to contact them directly and turn their opinion around. We did this on the weekly with an old client, every negative message we got was a chance to offer them a phone call to discuss their issues and over half the time they realised they were complaining to the wrong entity entirely and took any negative comments down. 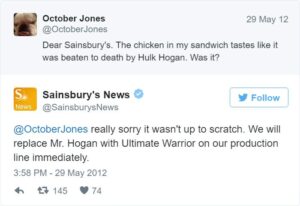 I also mainly use another brand account for enquiries, questions, bespoke requests and valuations so it’s just another touchpoint over a sales channel.

I love a good Twitter debate as much as the next person but mostly joining in #ContentClubUK, #FreelanceHeroesChat, #MarketingTwitter #AskTwitter etc to ask queries and get snippets of insight from others. Twitter polls are great for quick-fire market research to gage the preferences of your followers and threads are wonderful for sharing short sharp tips.

I’ve had leads from Twitter and found other freelancers on Twitter to work with – it’s great for finding communities, individuals, jobs and industry leaders. It’s also good to follow #PRrequest #JournoRequest to see if your business or employees could contribute to a publication and get some coverage.

If you missed this collab, get out from underneath your rock: 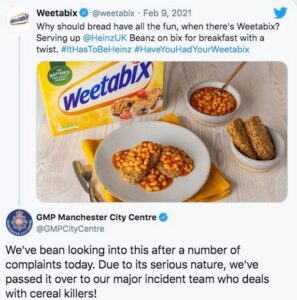 If your tweet gets picked up by a big account or celebrity you can potentially go ‘viral’ (a term that makes Marketers across the nation shiver). I remember getting an insane influx of followers and web traffic from Twitter after Louis Tomlinson retweeted an account I was working on at the time. All 13 year old girls outside our target audience but it was fun none-the-less.

Innocent Smoothies have nailed this. Their tongue-in-cheek, constant battle to validate blue as a smoothie colour has really solidified their brand as the naughty but nice smoothie option. I am a slave to their coconut water. 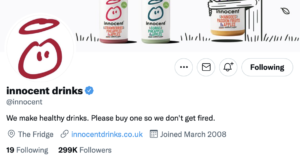 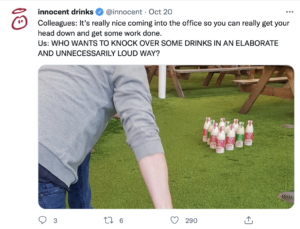 Other accounts that have really set themselves apart on the platform include Chipotle, McDonalds, Heinz, Wendy’s (emulate at your own caution) and General Electric.

I’m not saying churn out meme-worthy content constantly but nobody likes a boring corporate account. It’s not funny, doesn’t provide value and if you sell loans without a sense of humour on there you’re doing the world an injustice.

Of course I cannot talk about Twitter without talking about memes. I don’t just mean memes here but TRENDS, many many trends including memes begin on Twitter such as red flags, expectation vs reality, how it started vs how it’s going, did it hurt etc. Brands creating their own content jumping in on these can expect so much more engagement than a sales pitch even when using these across other platforms.

If someone is engaging with your ‘fun’ content then when you have a serious message or something to straight up promote they’re much more likely to see and then engage with that content. Science. 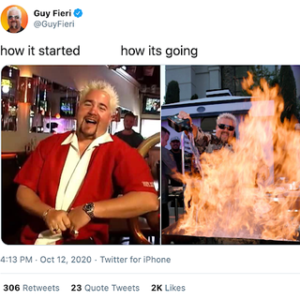 I’m not Twitter bashing, it serves many business purposes and can be fantastic for building your brand but if your resources and time are limited it’s not going to be the best bang for your buck if sales is your goal.

Ready to work together? Lets go